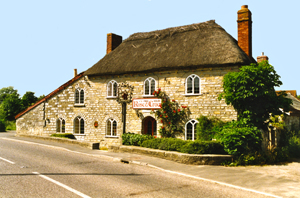 The Rose and Crown at Huish Episcopi, Somerset has been an inn since it was built in the mid-17th century. It has been in the family of the present licensees for four generations. The inn is affectionately known as Eli’s after Samuel Eli Scott who on New Year’s Day in 1920 at St Mary’s Church, Huish Episcopi, married Maude Lillian Slade, the daughter of William and Jane Slade, the founders of the present dynasty.

The inn is very unusual in having a taproom rather than a bar and its’ other most notable feature is the ‘Men’s Kitchen’, a little room off the front passageway, which still bears its’ licence No.2 on the door. Maude used to cook the family’s meals there on the range, but becoming increasingly frustrated at the mysterious disappearance of her Sunday Lunch’s roast potatoes, persuaded Eli that they needed their own kitchen! For many years the locals would bring their own fare to cook on the range for their lunch whilst they sat around the scrubbed trestle tables chatting and drinking their cider and ale.

Undoubtedly, the inn’s most poignant features amongst the family photographs in the Front Room are the pictures of William and Jane Slade’s two sons, Reg and Sidney, the Great Uncles of the present licensees, who were killed in action aged 23 and 19 on the Western Front during the First World War.

In 1871 William Slade became the Landlord on the Rose and Crown, which he ran with his Wife Jane. Jane died in 1920 and upon William’s death in 1921; Eli Scott became the Landlord and ran the inn with his wife Maude. Their daughter, Eileen Mary Scott was born in April 1923. On the 8th. August 1951 Eileen married Percy James Pittard at St Mary’s Church, Huish Episcopi. Her mother, Maude, died on Armistice Day, 1960 and Eli continued to run the inn with Eileen and her husband, Jim. Upon her Father’s death in May 1978, aged 84, Eileen became the Landlady of Eli’s continuing to run it with Jim and their three children. Jim died in May 1992 and Eileen died in April 2008. Their children, Maureen, Trish and Steve and Trish’s son, Sam, continue Eli’s tradition of offering hospitality to all.

Langport cooperative holds a local produce shop every Friday afternoon from the Mens Kitchen in the pub where you can buy fresh fruit and vegetables along with bread and lots more delicious goodies.

The Steam Rally visits Eli’s every year in  July where dozens of steam engines little and large all gather a field next to the pub where you can get up close and personal with these magnificent machines. Meet the many enthusiasts that restore and run these vintage steam engines.