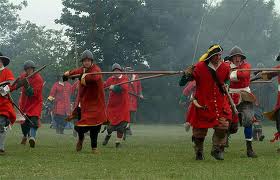 Taunton had been captured by the Parliamentarian army under the Earl of Essex in June 1644. After Essex’s army was forced to surrender at Lostwithiel in Cornwall in September, the Royalists maintained a Siege of Taunton, although the town was briefly relieved by Sir William Waller in late November.

When determining strategy for 1645, King Charles I had despatched George, Lord Goring the Lieutenant General of the Horse (cavalry), to the West Country along with orders to retake Taunton and other Parliamentarian outposts in the area. Although Goring briefly rejoined the King’s main ‘Oxford Army’, tensions between him and Prince Rupert, the King’s Captain General and chief adviser, resulted in Goring’s force returning to the West.

Parliament had meanwhile sent a substantial detachment of one cavalry regiment and four infantry regiments from their New Model Army to relieve Taunton. They raised the siege on 11 May 1645, but were themselves besieged by Goring’s returning army (although there was no longer any danger of the Royalists storming the town).

On 14 June 1645, the main body of the New Model Army under Sit Thomas Fairfax, with Oliver cromwell as Lieutenant General of the Horse, won the decisive Battle of Naseby, destroying King Charles’s main army. After the Royalist garrison of Leicester surrendered four days later, the New Model Army was free to march to the relief of Taunton.

The Army marched first south and then west, keeping near the coast so as to keep touch with Parliament’s navy. On 4 July it reached Beaminster where Fairfax learned that Goring had raised the siege and was retreating towards the Royalist stronghold at Bridgwater. To cover the retreat of the baggage, Goring’s army was spread over a front of 12 miles (19 km) along the north of the River Yeo, from Langport to Yeovil. The Royalists were outnumbered by Fairfax’s army, and their discipline was poor, mainly because a succession of lax Royalist commanders had allowed their men too much license to pillage (which also alienated many of the local people).

Fairfax was joined by the New Model detachment from Taunton, under Colonel Ralph Weldon, and started in pursuit. On 8 July, Fairfax captured Yeovil and crossed to the north side of the River Yeo. He sent another Parliamentarian force (part of the Army of the “Western Association” under Major General Edward Massie to deal with an attempted diversion in the direction of Taunton by some of Goring’s cavalry under George Porter a notoriously unreliable officer. Porter’s men failed to post proper sentries and outposts, and were taken by surprise by Massey and destroyed at Isle Abbots in the early hours of 9 July.

The battle of Langport took place the next day. Goring had occupied a strong rearguard position to cover the withdrawal of his slow-moving artillery and baggage. His main force held a ridge running north to south, a mile east of Langport. In front of the ridge was a marshy valley occupied by a stream named the Wagg Rhyne. Only a single narrow lane lined with trees and hedges ran across the stream via a ford, and up to the top of the ridge. Goring placed two light guns in position to fire down the lane, and disposed two raw units of Welsh foot soldiers in the hedges. Three bodies of horse (Goring’s Life Guard, and Goring’s and Sir Arthur Slingsby’s Regiments) waited at the top of the ridge. Goring hoped that Fairfax would be forced to make time-consuming outflanking moves.

Fairfax was prepared to rely on the superior morale of his cavalry to overcome Goring’s position. While his artillery silenced Goring’s two light guns, he sent 1500 detached musketeers through the marshes to clear the Welsh infantry from the hedges. He then ordered two ‘divisions’ (half regiments of horse) to charge up the lane. These two divisions were from regiments (Fairfax’s and Whalleys) which had originally been part of Oliver Cromwell’s double regiment of Ironsides before being merged into the New Model Army.

The first division under Major Christopher Bethel galloped up the lane four abreast, deployed into a line and charged and broke two of the Royalist cavalry regiments. A third Royalist regiment counter-attacked but the second division of Parliamentarian horse under Major John Desborough charged and routed them. As more Parliamentarian reinforcements streamed up the lane, Goring’s men broke and fled the field.

Cromwell halted his well-disciplined cavalry at the top of the ridge until his forces had reformed. Then they moved rapidly in pursuit. Goring had set fire to Langport to delay the pursuers and tried to rally his army two miles further on, but his army dissolved as Cromwell’s troopers approached, abandoning their baggage and most of their weapons. Many of the fugitives were attacked by local clubmen who had banded together to resist exactions by the armies of both sides in the Civil War.