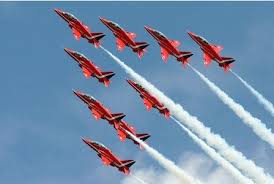 With crowds flocking in their tens of thousands to the Somerset base, the Fleet Air Arm excelled by providing a day to remember for generations to come. The Show opened with a regular crowd-pleaser as the Red Arrows took centre stage and impressed the onlookers with their mastery of the air. “Teamwork” was the theme for this year’s Air Day and demonstrations from the finest display teams on the circuit entertained the 35,000 visitors.

Following on from 2012’s award-winning event – Gold in the South West Regional Tourism awards – the 2013 show was again a glittering success, showcasing the Fleet Air Arm intermingled with a comprehensive six hour flying display, regarded as one of the best in recent times.

The Royal Navy Historic Flight displayed the iconic Swordfish along with the Royal Navy Wildcat; showcasing the old and the new. Current Royal Navy contributions also included the award-winning Royal Navy Black Cats, the Maritime Merlin and Lynx Wildcat Maritime Force (LWMF), who put on a fast-paced routine along with loud bangs, flares and smoke.  Lieutenant AJ Thompson, one of this years Black Cats pilots said, “It a great thrill performing in front of your home crowd. We do many flying displays around the county during the season but Yeovilton is special.”